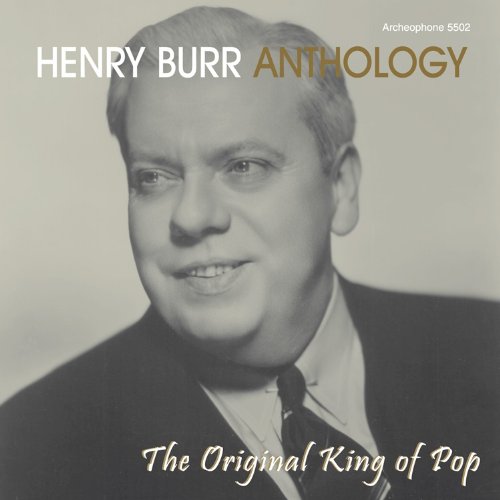 This collection of 27 songs takes the listener on an expansive trip, following Burrâs career from one of his earliest recordings, made in 1903, to one of his last commercial releases, cut in 1928. It demonstrates the variety of material Henry recorded, shows his ease with sacred, Scottish, and sentimental material, and it even highlights his fun side, joking around with Ada Jones in 1914 and with Billy Murray in 1925. Also included are two standout performances with the legendary Peerless Quartet, one from 1908 and another from 1917, along with a beautiful rendering on Burrâs own label of âThe Missouri Waltzâ by the Sterling Trio, and representative duets with Henryâs best known partners, Frank Stanley and Albert Campbell. For 25 years, Henry Burr proved himself "The Original King of Pop."

Probably no one, not even Billy Murray, participated in as many recordings in the acoustic era as Henry Burr. He was born in Canada as Harry McClaskey, and he originally wanted to be a concert singer and to perform sacred hymns, such as he did in one of his first recording sessions, waxing "The Holy City." His voice had a very serious sound to it, which you can hear on songs like the traditional Scottish song, "Loch Lomond," "Silver Threads Among the Gold," and the pathetic "Mighty Lak' a Rose." But Harry warmed to the horn and soothed the hearts of audiences for over 25 years with his impeccable delivery of the most beautiful ballads the world has heard. You can hear his newly mature voice on "I've Got the Time, I've Got the Place, But It's Hard to Find the Girl" and the big hit, "I Wonder Who's Kissing Her Now," and a few years later on the perennial favorite, "When You and I Were Young, Maggie."